The following article is part of the Art Forward series of the Rahr-West Art Museum.

The Rahr-West Art Museum has two lithographs by renowned artist RC Gorman in the collection, thanks to the generosity of Ruth and John West. A print, Untitled, is currently on display on the first floor of the historic house along with other works that deal with identity. The other work, The Gossips, serves as inspiration for one of the upcoming 2022 utility box designs, which artist Kristen Lango will be painting in the coming weeks, just east of Chewy’s Bar in Manitowoc, Wisconsin.

Navajo artist RC (Rudolph Carl) Gorman was born on July 26, 1931 in Chinle, Arizona. He was an outstanding oil painter, lithographer and sculptor. Her paintings are primarily depictions of Aboriginal women characterized by flowing forms and vibrant colors, characteristics found in the two works in the collection of the Rahr-West Art Museum.

Gorman attended reserve schools before joining the Navy in 1951. Interestingly, his father, Carl Nelson Gorman, was an early Navajo code-speaker who developed an unbreakable code used in the Pacific Theater during WWII. World War. Carl was also an artist and illustrator and RC’s grandmother was a famous weaver.

Later, RC Gorman traveled to Mexico and was influenced by Mexican masters, such as the famous painter Diego Rivera. Gorman then studied at Mexico City College on a scholarship from the Navajo people. After his year in Mexico, he opened a studio in San Francisco and modeled for art classes to help with expenses.

Gorman eventually settled in New Mexico, and much of his work was deeply influenced by his life there. In 1998, Gorman explained that growing up, his “family was rich in artistic talents and creative spirit, but not in material possessions”. He went on to explain his success: 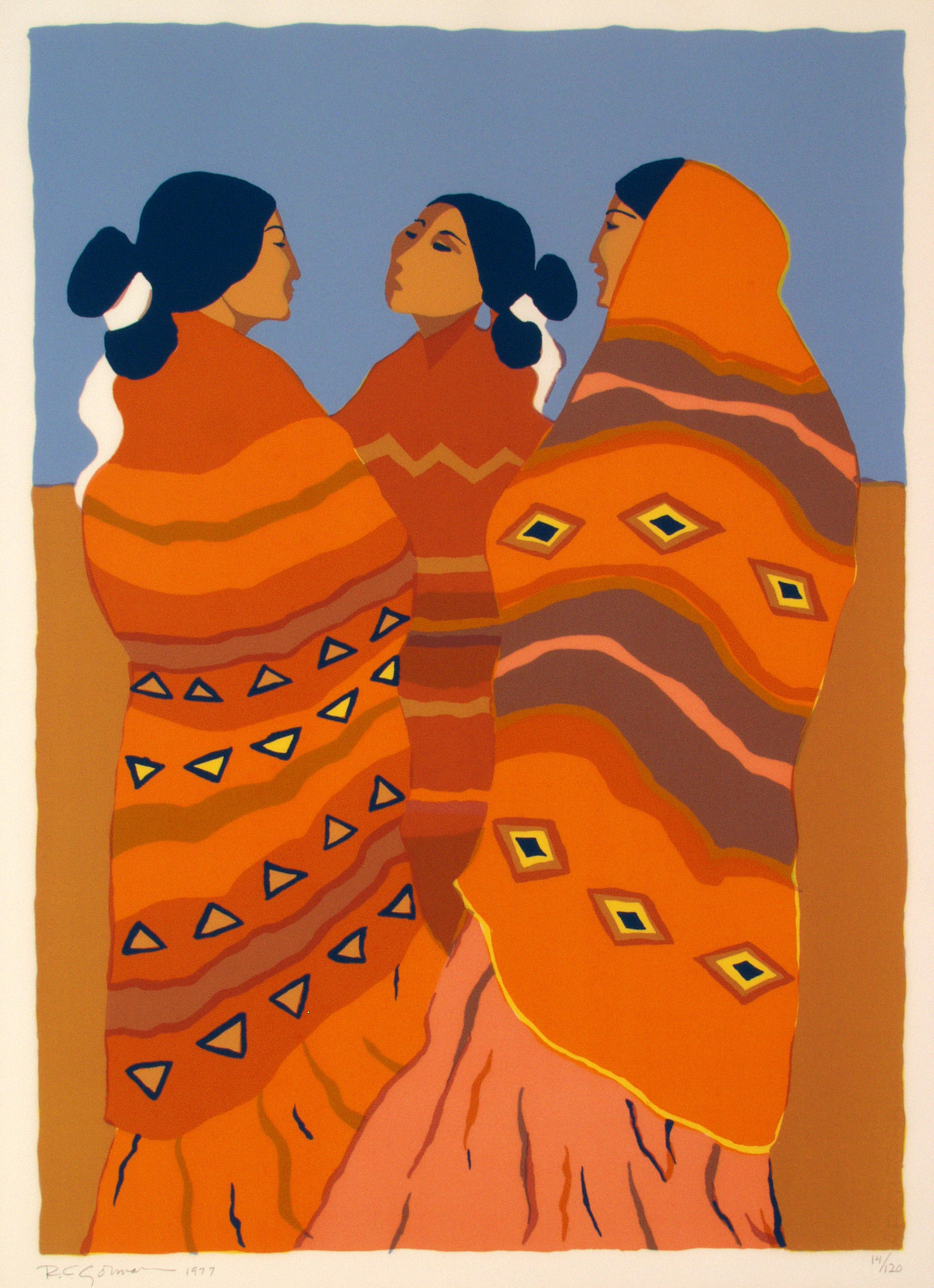 “I have been fortunate to live and work in the beautiful valley of Taos, an environment equally rich in art and tradition. The spirit of Taos has encouraged and inspired me, and my focus as an artist has matured here. I am truly grateful to my friends, drinking buddies, family, clients and loyal staff, all of whom have made my way of life here possible. Thank you for sharing the light. (https://rcgormannavajogallery. com/the-artist/)

Overall, Gorman’s work has been warmly received by collectors and critics. The New York Times dubbed him “the Picasso of Native American artists”. He was the only living artist to be included in the 1973 “Masterworks from the Museum of the American Indian” exhibition at the Metropolitan Museum, a hit followed by his inclusion in the 1976 American Indian Artist series on PBS. Many celebrities have collected his work, such as Elizabeth Taylor, Gregory Peck and Arnold Schwarzenegger. Andy Warhol not only owned his work, but also painted Gorman many times.

RC Gorman died in 2005 but left behind a plethora of works that are in many museum collections including the Heard Museum, the National Museum of the American Indian and, of course, the Rahr-West Art Museum.

Visit the RC Gorman Navajo Gallery website at rcgormannavajogallery.com to learn more about Gorman and view his other work. Other contemporary Indigenous artists are currently on view at the John West Gallery at the Rahr-West Art Museum through July 31, 2021 in the No More Stolen Sisters and Culture and Community exhibitions. See rahrwestartmuseum.org for more information on museum exhibits, events, and hours.