The City of Sedona invites the public to attend its upcoming Artists’ Reception on Thursday, February 10 from 4-6 p.m. in City Council Chambers and the Vultee Conference Room at City Hall to celebrate two couples: master painters Betty Carr and Howard Carr and painters Susan Kliewer and Jeff Dolan. Special musical guests will be Gina Machovina and her husband Alberto Hinojoza.

Masks are mandatory at the event due to pandemic concerns. This exhibition is scheduled until the end of April.

“It is with great pleasure that I present the first exhibition of couples in the city. However, I was so sad to learn of Howard’s recent passing. Betty admirably decided that the show should go on. This special exhibit has also become a tribute to Howard’s life and work. Most know Susan as a talented sculptor and are unaware of her love of painting, which she shares with her husband, Jeff. This exhibit also highlights their work,” said Nancy Lattanzi, Arts and Culture Coordinator. 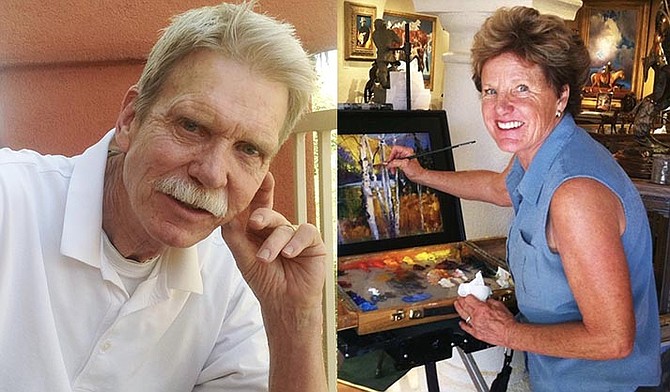 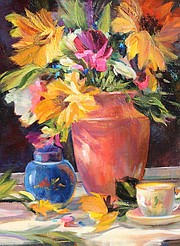 Betty Carr earned her MFA from San Jose State University and has taught painting and sculpture workshops nationally and internationally for over 45 years. She was selected as a Master Artist by the American Impressionist Society. As a professional artist throughout her distinguished career, she has traveled widely, collecting inspiring subjects through plein air painting. She has received numerous awards from juries and has exhibited in major exhibitions and galleries across the country. In addition to being featured in numerous books and magazines, Carr is the author of the acclaimed educational book “Seeing the Light: An Artist’s Guide.” She is a signature member of the Knickerbocker Society of Artists and the Arizona Plein Air Painters.

Howard Carr was born in California and was a child actor who landed roles in several television series, including “The Rifleman”, “My Three Sons” and “The Danny Thomas Show”. After leaving the theater, he served in Vietnam and, after his military service, obtained a degree in fine arts. In 1976, he moved to Santa Cruz, California, and opened a graphic design and sign business. He meets his wife Betty there. They moved to New Mexico where light and color greatly influenced his paintings. Known for his landscapes, still lifes and coastal scenes, Howard’s impressionist oils reflect clarity and simplicity, ultimately his artistic strengths. Howard’s contributions to the art world are numerous. He has written and illustrated numerous articles for leading magazines, as well as leading national and international educational workshops.

Although known for her bronze sculptures, painting has always been Kliewer’s first love. In fact, she spent many happy days painting in Europe and the United States Originally from California, she called Arizona home for 40 years and began sculpting in 1987. In 1993 she won a competition to create a Sedona Schnebly monument for the city. from Sedona. The 10-foot-tall sculpture of his city’s namesake was installed in front of the Sedona Public Library in 1994. Many more of his monuments have been commissioned and installed across the United States and Europe. She has won numerous awards and is particularly proud of the Governor’s Award at the Cowgirl Up Show in 2007. Her work can be seen in several galleries across the West, including those in New Mexico, Utah, Wyoming, of Arizona, Colorado and California.

Dolan grew up in Ipswich, Massachusetts and through visiting the various galleries of local artists he developed a love for impressionist landscapes and harbor scenes by painters such as Emile Grupe and Aldro Hibbard. Moving to Sedona in 1988, he began to take an interest in Western art. Eventually, Kliewer and a few of his fellow painters pitched in and bought him his first French easel, so he could join their Wednesday painting group. Since then they have traveled to England, Ireland, France and New England with their easels and palettes, as well as painting in the western United States. Dolan believes the American West has always represented a world of discovery and new beginnings.

Visits are available by appointment only. To schedule an appointment or for more information about City Hall’s Art Rotation Program, contact Lattanzi at 928-203-5078 or [email protected]